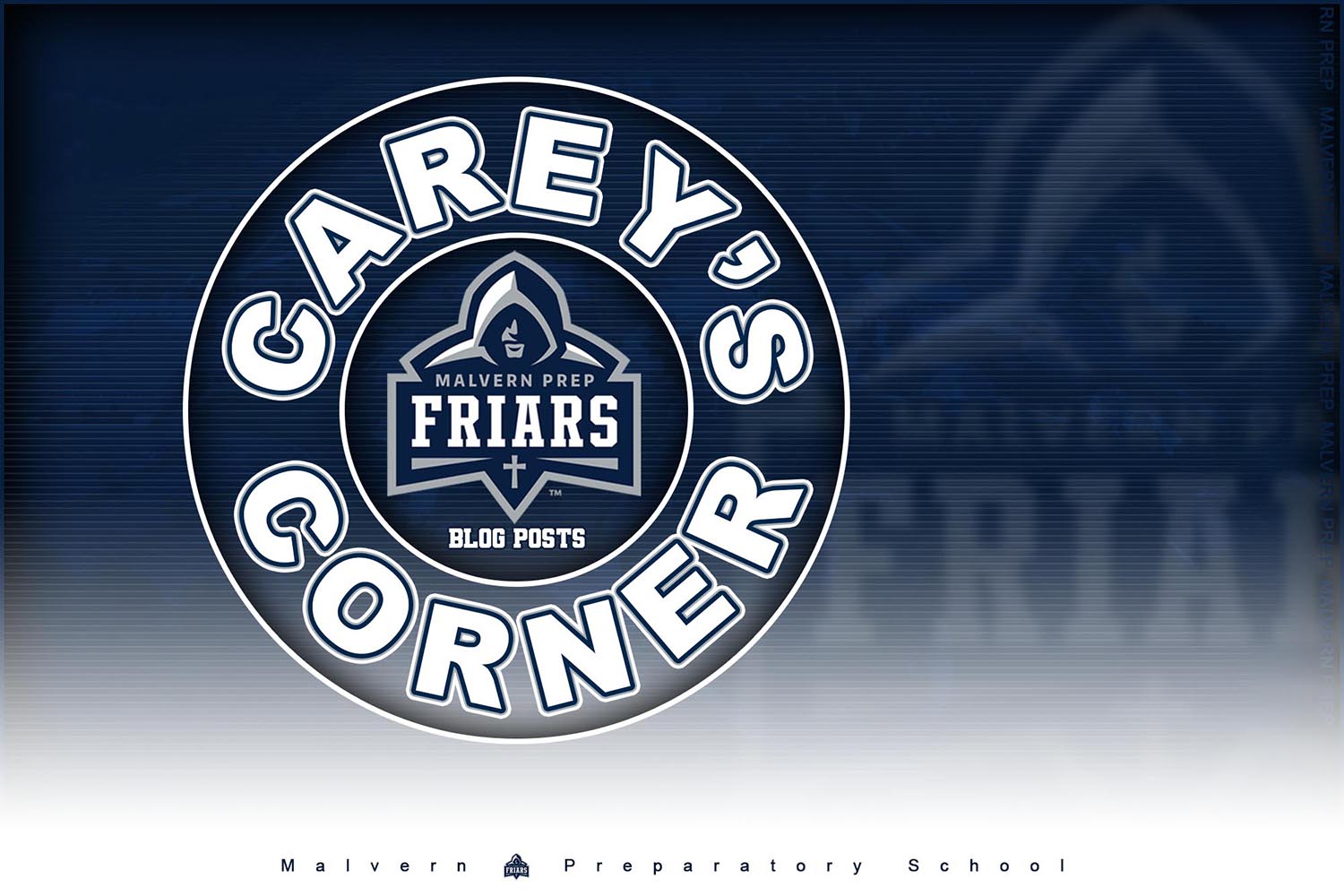 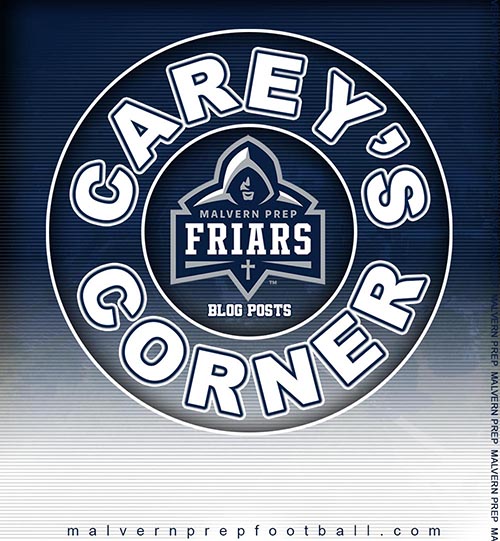 Malvern has played some great defense over the years, courtesy of some great players and coaches. But what about their offense??? Same coaches and players. I do not know of any coach who doesn’t find a game easier to coach when their offense is scoring TDs early and often. Using the same records from 1950 to the present (www.tedsilary.com) I looked for teams that averaged at least 30 points a game, about 1 TD a quarter. 30 is a nice, robust number, right? I know teams of today are more up tempo than teams of the past. I would estimate that teams average around 10 possessions a game. Scoring 4 out of every 10 possessions forces the other team to outscore you in order to win the game. With Malvern’s reputation for playing solid defense, the possibility of a shootout type of game was few and far between.

Below are the teams that averaged 30 points or better in a season, record and number of times that team hit at least 30 points in a game. You might see a familiar last name pop up a few times

OTHER NOTES OF INTEREST

The above 11 teams were a combined 103-10. Wow. The 6 teams that just missed were a combined 54-8. Three teams had a mercy rule averages of at least 35 points a game. Gamp’s 2005 was legit good. They went 10-1 losing to Valley Forge Military Academy. VFMA had a roster sprinkled with, let’s just say, older players. I do not have the quote 100% but after the game, in a way only Gamp could speak, he stated “that was the best college team he had ever coached against in a high school game”. What is incredible about the 424 points and 42.4 average of the 2008 team is that in more than half the games the 1st team did not play past half time. What is more incredible is the only time they didn’t score 30 points was an 18-0 shutout of CHA. Go figure. Of the 17 teams cited above MP won the league title outright 12 times and was a co-champ once. The 2013 team was involved in a rare shootout against CHA. Final score 63-50. In this game, prolific passer Alex Hornibrook only had to air it out 4 times. The Friars ground game took care of the rest and rolled up 457 yards rushing. Go my big fatties up front! Troy Gallen chewed up 333 of them. The 63 points in a game is a MP record. Just missing the record was the 1973 team that put up 62 points in a win over Episcopal.

THE TOUCHDOWN CLUB (1st in a series of 3)

Over the years Malvern has had the reputation of not only consistently fielding excellent teams but more specifically excellent defensive squads.

I researched the records (Ted Silary) from 1950 (first year in the Inter Ac) through 2019 and have come up with “The Touchdown Club”. These are teams that gave up a touchdown or less for the entire season. For the sake of a definition, the scoring average had to be between 7.0 to 7.9. My apologies to those teams before 1950 as the information is incomplete. This is the list, starting from the lowest average. team records, number of shutouts and the head coach:

Just missing The Touchdown Club were the teams of

OTHER NOTES OF INTEREST

These eleven teams were 84-11-3. The 1954 team lost their 3 games by the scores of 12-6, 14-7 and 14-7. Their tie game was 7-7. The 1960, 1961 and 1962 teams were coached by Mike Mayock. In the 6 degrees of separation category, Mike’s grandson played on Gamp’s undefeated IA championship team in 2008. Both Mike Mayock and Jim Auch, Jr. had great success at other IA schools. Mike coached at The Haverford School and Jim Auch, Jr. at Haverford School and Episcopal. Coach Mayock won back to back titles in 1970 and 1971 at HS. Both teams being undefeated. I had the “pleasure” of playing against both of those Haverford School teams and can attest to the fact that they were well coached, very good football teams. Because it was so long ago their success sometimes gets forgotten. They would certainly be in my discussion of any ranking of all- time great IA teams. Coach Auch I believe (if someone knows different let me know) is the only coach to win titles at 3 Inter-Ac schools. He was the coach at Haverford School before Mike Mayock. Coach Auch tied for a title in 1968 at Haverford. At EA he strung together a 3-peat in 1981, 1982 and 1983. The 1972 MP team only gave up 4 TDs all year. Lastly the 1972, 1979 and the 1985 teams only had one opponent all year reach double figures in a game.

With the advent of the PIAA playoff system, the tradition of Thanksgiving Day games has slowly been eliminated. PIAA playoff games are usually scheduled for the Friday or Saturday of Thanksgiving weekend. This makes playing a TG game virtually impossible. It is disappointing that many traditional rivalries have fallen by the wayside. Historically the Inter-Ac has not had games on their schedule that included a Turkey Day battle. The exception would be Malvern Prep.

Would it surprise you to know that over the years the Friars have played 34 times on Thanksgiving? The first game was 1959 with a win over St. Matthews. However, it took the Friars until 1973 to renew a Turkey Day tradition with a 33-19 win over the Hawks of St. Joes. From 1973 to 2016 the Friars played 33 times. Tradition held strong as MP compiled an overall record of 27-6-1. Their lone tie, 12-12, was to Archbishop Carroll in 1994. In addition to St. Matthew, Malvern has played Carroll 17 times, St. Joe Prep 9 times, Monsignor Bonner 4 times, Cardinal O’Hara 2 times and Avalon from Maryland, once. The records against these Catholic League foes were as follows, Carrol 13-3-1, the Prep 6-3, Bonner 4-0 and O’Hara 2-0. Pretty impressive. Their final game in 2016 was a 30-8 win versus The Avalon School of Maryland.

As you might expect, Malvern’s offense and defense did their job. Over the 34 game span MP averaged 22.5 points while only giving up 12.9. The defense gave up a TD or less in 15 of the 34 contests. This also included 7 shutouts. Offensively, the Friars hit the 30 point mark 13 times with a high of 48 against Bonner in 1980. The top 3 offensive performers were as follows….

All these top performances contributed to a Friar victory.

Probably one of the more exciting games recent history was in 2008. It turned out to be Gamp Pellegrini’s last game and certainly one his most exciting wins. I was in attendance and can attest that it was one of the most memorable high school games I have ever watched. Before a packed house and I mean packed house at Villanova stadium, Malvern overcame a 21-0 hole and a 21-7 half time deficit to beat Catholic League power St. Joe Prep, 34-27. If you like offense you would have loved this game. The teams combined for 847 yards of offense and 1,016 yards, if you included returns. The winning score came on a Billy Conners to Joe Price 27 yard TD pass with 37 seconds left on the clock.

Speaking of Billy Conners, he had a game for the ages. Hard to believe with this performance his main sport was lacrosse (Duke). Take a moment to appreciate these stats. For the game, Billy Conners

In addition to Conners, the other offensive stars were Rob McCabe 5 catches for 64 yards and rushers Neil Willis 11-42 yards and James Connelly 13-87 yards. Last but certainly not least, was Price catching 7 balls for 172 yards and 3 clutch TDs.

And since I was a lineman all my life, you don’t compile 440 yards of offense without the big fatties up front. Shout out to Matt Devlin, Dave Umile, Mike McCorkle, Joe DiTroilio, Bobby Panchisin and CJ Mooney at TE.

Great game and a great way to end your high school career. Turkey always tastes better after a win.

Recently, Ted Silary posted on his website the remarkable feat of Cedric Madden from CHA. In 2011 Madden, at one point, scored 16 consecutive TDs for CHA, He scored 23 of CHA’s 25 rushing touchdowns and 24 of CHA’s total of 27 TDs that year. CHA and Madden had an excellent year in 2011. Overall, they were 7-3 and 4-1 in the Inter-Ac.

Coming into the championship game vs Malvern, CHA and Madden were on a roll. They were 7-2, having beaten all the other IA schools. Madden led the way with 1418yds on 221 carries and 144 of the teams’ 181 points. His per game averages were 23 carries for 148 yards (6.4 yds a carry) and close to 3TDs. CHA, who was averaging close to 21 points a game was confident coming into the game and were positioned for their 1st outright title. MP was also coming into the game just as strong. After giving up 21 points in an opening weekend, one point loss to Delco power Ridley, the Friars quickly hit their stride and went 8-0 with 4 IA wins. In that stretch the Malvern defense only gave up 51 points. The winner of this game would be the outright IA champs.

Cedric Madden finished with 17 carries for 68 yards and no TDs, well below his normal game production. On the day the Malvern defense came up big again not only holding down Madden but also the Hillers. CHA had 121 total yards of offense on 40 plays. This marked the 4th time the Friars pitched a shutout in the 9 game win streak. QB Billy Ford led the offense with a rushing and passing TD. The championship was Kevin Pellegrini’s 1st outright title, having shared the IA crown with Chestnut Hill and Haverford in 2009. Kevin’s title came 33 years after his dad, the legendary “Gamp” Pellegrini won his 1st outright title in 1978.