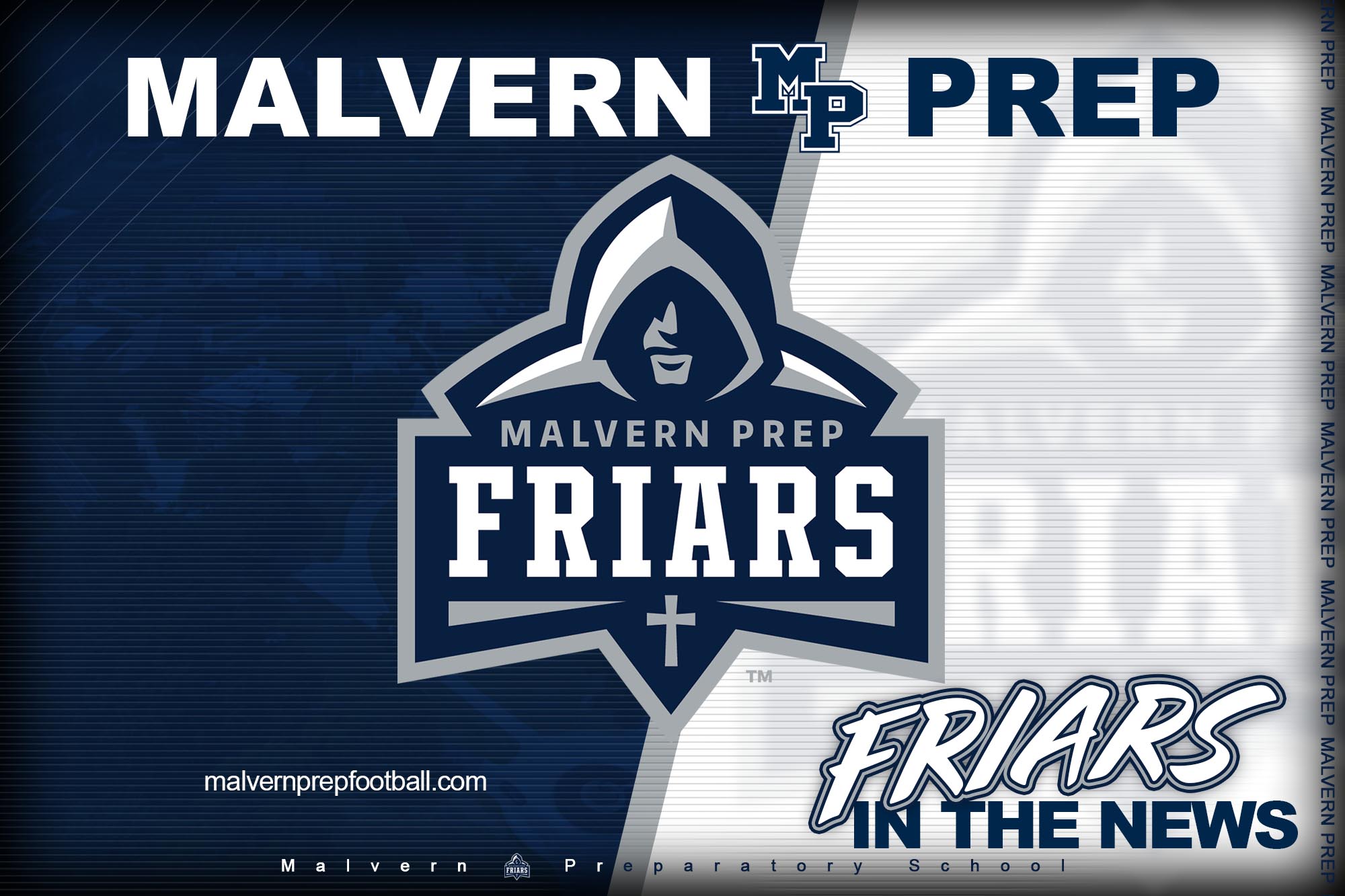 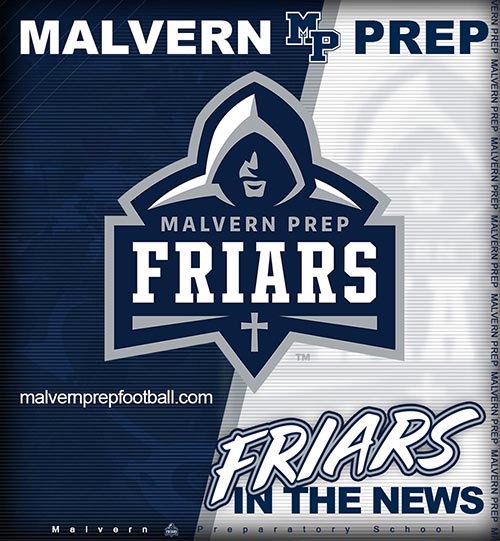 The Friars Sweep a Victory vs Germantown Academy

Malvern Prep took on Germantown Academy on a sunny Saturday; it was the perfect day for Football. This was the kickoff to the Inter-Ac. Through positive attitudes, and a previous week of hard practice filled with a by-week, the boys left GA with a victory 33-21.

The boy’s strength in perseverance came to light when they started the first quarter off losing 8-0 with four minutes left.

Senior Christian Bockrath (#37) commented on the sideline, “We have the game plan, we just need to shoot our shot.”

This was the best offensive game in the season. Junior quarterback Lonnie White Jr. (#10) had complete clear vision on the field. When a pass or drive wasn’t open, he took off to gain multiple yards for the advancement down the field. With this vision, White was able to diss a sack by running towards the RedZone to complete a 20-yard pass to senior John Gordon (#18) for a touchdown. Sophomore running back, Isaiah Wright (#26), completed multiple running carries for the Friars including a touchdown. From the use of mixed offensive plays, and very little mistakes, Malvern earned every bit of this win. The boys truly played like a team of brothers.

Defensively the boys did what they do best; causing turnovers for Malvern’s repossession. Senior Justin Roberts (#51) was caught making tackles at the start of GA’s plays to cause little to no gain on their carries as well as a fumble recovery. Jake Brownley (#40) and Caimin Hayes (#31) both had interceptions to slow the offensive of Germantown Academy. Cade Szostek also had an interception from a deep throw down field to end the game. Senior (#71), Will Redden, blocked for Wright (#26) to help complete a touchdown. Not one quarter was stronger than the other, the Friars defense was consistent the whole game.

The team hosts William Penn Charter this Saturday (10/19) at 2:00 p.m. Charter has an 0-1 record in their Inter-Ac season. The boys are ready to carry their aggressive attitude through the Inter-Ac, they are ready to thrive.

All tied up in Buffalo.

Malvern Prep Football Breaks Through with a Victory Against Berks Catholic

With a challenging start to the season, the Malvern Prep Friars were eager to walk out of Berks Catholic with a chip on their shoulder. On Friday, September 20 th , they gained more than just the “W”. The Friars ended the game winning 42-7 against the Saints.

Steven Rose (#5) walked on a familiar field Friday night alongside his teammates whom he considers brothers. Malvern may feel like home, but Rose is from the Reading area that Berks Catholic is located. Rose represented the Friars in high regards through his respectfulness, athleticism and a touchdown in the 3 rd quarter.

The game started off with Berks Catholic having possession until bobbling a snap on the 4 th down, causing the ball to fumble. With a recovery by DeAngelo Stocker (#4), the Friars score with four minutes left in the first quarter. Junior Lonnie White (#10) seemed to play quarterback and wide receiver all in one. In the first half he broke away as quarterback for a close to 50-yard touchdown run followed by another five-yard run to score a Malvern Prep touchdown. All of the Friars touchdown running carries and receptions were lengthy and well executed. Isaac White (#12), Steven Rose (#5) and Ryan Maguire (#3) scored in the 3 rd quarter to help bring Malvern up to 42 points by the end of the 4 th.

Yaahdir Nash (#17) was out for this game due to an ankle injury. He reflected on his team’s energy and actions by noting, “It’s one thing to be cheering on your team when their winning, but this is needed all the time. This energy is everything.”

The Friars defense was unstoppable. Senior Justin Robers (#58) sacked the Saints quarterback twice. Senior Coltin Deary (#51) had a tackle on the Saints offense, stopping them on the five- yard line on their 4 th down. The Saints couldn’t seem to break through the Friars defense.

Roberts mentioned the team’s reaction to a win on Friday by saying, “The happiness to get a win like that over a good team is unexplainable. We all came together.”

Head coach David Gueriera reminds the team how the previous weeks practice positively affected the game. Gueriera wanted the boys to soak up the victory but be ready for practice on Monday. This Friday, September 27 th at 7:00 p.m. the Friars take on the 3-1 Archbishop Spalding High School football team, out of Maryland, at the home Pellegrini Complex. Tune into Malvern Preps Football Twitter account @MalvernPrepFB for game content and updates.

PrepLive: White goes back under center to lift Malvern Prep to first win 09.21.19

Eastern PA Football: Pair of Friars Too Much for Saints 09.21.19

Malvern Prep and Imhotep fought for a win standing with 0-2 records under the lights on Friday the 13 th . The game ended 28-14 with Imhotep taking the win this game. The beginning season for Malvern has been a beneficial learning game. They see the adversity, weak spots, and drive the game lessons to work harder for a win.

Freshman Bryce Pippin (#11) continues to be the backbone of the team in the position as starting quarterback. His performance since his first game vs LaSalle high school has improved tremendously for a week of practice in between games. Pippin scored his first high school career touchdown running the ball through the Imhotep defensive line at the 5-yard-line in the 3 rd quarter. Previous quarterback Lonnie White (#10) worked with Pippin phenomenally as wide receiver. He completed multiple running receptions from Pippin to land first downs in the first and second quarter including a touchdown. Lonnie showed out in the position as wide receiver, and the decision of the coaches for Malvern Prep to move him was proven good. White also had an interception in the 3 rd quarter at the 42-yard-line with back to back receptions following. His true athleticism and high skill set with the flexibility to excel in different positions showed.

Caimin Hayes (#31) helped lead the defense this Friday and makes valuable points to his teammates in closing remarks by saying, “we ALL must give everything we got at every minute on the field regardless the score.” Coach Dave Gueriera follows Hayes remarks by emphasizing, “You find out about yourselves when you lose, this is the journey for us. Let’s look within because how we handle this is everything.” Coach breaks it down to the point that Malvern simply made more mistakes than Imhotep, two really good teams with the same record battelled it out to break for a win. He left the boys with a reminder that they will “have to work really hard and get ready for Berks Catholic.” Onto the next the Malvern Prep Friars go as they are hosted by Berks Catholic this Friday, September 20th.

The goal of a football game is to win, but the Malvern Prep Friars have more than that in mind. The LaSalle game brought out the best in the 2019-20 team and coaching staff. Eager, positive attitude is the only way to describe the energy that this team let out. The LaSalle High School Explorers came out on Saturday ready to match anything and everything Malvern sent their way.

The defensive and offensive line were nothing but exceptional. The defense had two back to back stops on the 10-15-yard line; there were plenty of “money downs”, (defense is on the 3 rd down before a turnover in possession), let out from the boys on the sideline. Caimin Hayes (#31) had an interception to run the ball back to the 8-yard line for a Malvern Prep first down. Kellen Mathias (#1) blocked the LaSalle’s quarterbacks pass twice in the second half. I spoke to senior Cole Deary (#51) about the defense this game and he explained that, “We fought for four quarters and didn’t stop. Yes, it didn’t go our way, but it happens, and we prepare for Imhotep.”

Offensively this team didn’t quit. D’Angelo Stocker (#4) was frequently seen making running tackles and showing the adversity he is skilled with on the field. He shares comments about this game such as, “We are a very versatile team, and we just have to find our rhythm in discipline to earn victory.” The Lasalle Explorers brought good competition and challenged the Friars. Bryce Pippin (#11) started quarterback for the Friars due to Senior Lonnie White (#10) being out with an injury. As a freshman playing on an elite high school football team, Pippin locks the trust with his team proving his fit for the position. With just a week of practice to prepare for his first varsity football game on Saturday, Pippin still accomplished to help the team score two successful touchdowns. Pippin showed out with a deep pass to Tyler Tinson (#2) to bring the team to score following that play. He showed no fear, and only wanted to learn from his teammates and coaches after each play.

Coach ends the game with final remarks like, “We played well, and sometimes when you play well, you’ll still lose and that’s ok.” Coach lifts them up with excitement for the future and doesn’t let them feel heavy-hearted from the end score of 13-24. The Malvern Prep Friars will be hosted by Imhotep Charter High School this Friday, September 13 th at 6:30 p.m.

The Post: O’Shaan Allison ready to prove worth as a redshirt freshman 08.30.19

The Philadelphia Inquirer: St. Joseph’s Prep is No. 1 in The Inquirer preseason Southeastern Pa. football rankings 08.22.19

High school football teams across the country are gearing and training for the intense season that lies ahead this fall. The Malvern Prep High School football program is a high-performance team that could not be understood from the glance of a roster or game booklet. The program exemplifies the brotherhood that is synonymous with the school. Senior Ryan Maguire (#3) stressed that "They teach us mental discipline and excellence, not just physical training." Discipline is a must with summer camp where two-a-day practices fill the boy's schedules in the heat of August. At Malvern Prep, they soak up every second of it and relish the time preparing with their brothers.

Senior Brendan Flynn (#77) mentions how "Our coaches are here every day, and they give us 100%. They love this program just as much as we do." The dedication is top to bottom, and everyone contributes in this family. The Malvern Prep football team posts practice players of the week on their Instagram account in recognition for those who practice what the team is all about, hard work and lifting each other up. Some new transfers discussed their experience, noting how Malvern's football team is a family, not just a program.

Last year’s team was known throughout the region for their 11-0 undefeated season. This year, as in many years past, they will be circled on the opposition’s schedule, all looking for retribution. However, senior Ryan Maguire acknowledges that "In a way, we are like underdogs, a lot of seniors graduated from our 2018 team and many believe we won't be as good this year. We want to continue the legacy that lives at Malvern Prep." A group of players agreed that they want to take the season one game at a time with a humble attitude, but Ryan Maguire says "we're coming."

Malvern Prep is coming, and they are ready. The team is eager to get back to doing what they love, representing a school that they love and competing with their brothers. Senior Nate Daller (#8) sums it up plainly, "A lot of hardworking guys who want to win."

The Friars take on DePaul Catholic this Friday at home for their first season scrimmage. There's something magical about a Friday night under the lights of a football stadium. At the PAC (Pellegrini Athletic Complex), the Malvern Prep Friars will be ready to set the passionate, competitive tone that they have already established in camp. The atmosphere will be electric.

Written and Edited by Gracie Cleveland